FQ: This was one of the funniest books I’ve had the pleasure of reading in quite some time. Your sense of humor is breathtaking and I would venture to guess the personality and voice that plays across the pages of Everything’s Relative is pretty darn close to the gal who wrote it. Have you ever been misinterpreted by someone close to you with a delivery that was meant to be humorous (but wasn’t received that way)? If so, can you share the moment?

MCCARTHY: First, thank you! You sure know how to make a girl’s day. And second, that’s one of the toughest questions I’ve ever been posed. The truth is, there is a bit of me in every character I write; I don’t even know how there couldn’t be. So to that end, whenever anyone misinterprets the humor in my work, or fails to find it funny, it’s a bit of a blow. When I write, my goal is to always find a fresh way to say the things that I *think* other people think but don’t necessarily want to admit. If it makes the reader a little uncomfortable, that’s okay—as long as she’s going Oh my God, I think/say/do that, too!

FQ: I was sad to see you are a ‘recovering’ leopard-print addict. Does this mean it is nowhere to be found in your wardrobe (and if so, why)?


MCCARTHY: Please note I said “recovering,” not “recovered.” The truth is, I love animal prints of all kinds. (In fact, as I type, I am wearing my favorite patent leather leopard-print flip-flops, and my living room floor is buried beneath a giant zebra rug.) Sometimes I fear that one day I’ll be that old lady you see toting a giant bedazzled giraffe-print handbag and wearing the matching visor. But then I decide that wouldn’t be so bad. I’d rather be her than the gal next to her in the sensible shoes and the moth-eaten cardigan.

FQ: I was thrilled to see you have two daughters. I also have two daughters and can assure you they were sugar and spice and everything nice until they passed through the gates of the teen years. What has been one of your greater challenges when you have to assume the role of referee between them?

MCCARTHY: It’s exhausting, that refereeing bit. But honestly, there is nothing in the world like having a sister. It’s such a profound training ground for how to be a better roommate, spouse, employee and friend. Sure, sisters know how to push each other’s buttons faster and better than anyone else on the planet; they’re also the only ones who understand both your nature and your nurture on the deepest of levels. They were there; they saw what you saw. And not to get too maudlin here, but my siblings and I have lost both of our parents. I can’t imagine having gone through that without them. And while my brother has been just as integral to this survival process, his relationship with our parents was different than the one my sister and I had, simply by virtue of his gender. I remind my girls this all the time: friends and boys will come and go, and someday dad and I will be gone...but they will always have each other, like it or not. (They love it when I say this! NOT.) 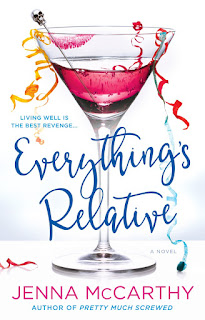 FQ: Okay. Enough of the personal questions! Let’s dig into this deliciously humorous tale you’ve spun! Of the three sisters, which of them was the easiest to develop and why?

MCCARTHY: I love all three of these woman as if they were my own flesh and blood. When I was conjuring them, I won’t lie: I began with myself and my siblings in mind, albeit vaguely. Then I crafted lists of characteristic birth order traits. Jules, the oldest, had to be reliable, driven and protective. Brooke, the middle, had to be thoughtful and loyal; the peace-keeper. Lexi, the baby, was destined to be a reckless, independent, red hot mess. It turns out, in my own family, my siblings and I fit these molds practically to a T. When the book came out, my brother—the baby, and also a high school drop-out and recovered drug user with an illegitimate child—was like, “Wait. I’m Lexi?” I laughed and laughed. I was like, “Really? This surprises you?”

FQ: I adored Lexi’s character because she is so spot on in her assumption of the role of the baby among her sisters. However, she is such a bad*** in many respects! Were there moments in the creation of her character when you had to draw down a bit in your rewrites? If so, was it your call? Your editor?

MCCARTHY: Oh, Lexi was way worse in the first draft. And the truth is the rougher and edgier she was, the more I adored her. Alas, it was my editor who wanted her reined in a bit. She insisted that if Lexi was too bad, she wouldn’t be a sympathetic character whom readers would root for. I fought for the bits of her that I felt made her interesting and whole, and reluctantly gave up the rest. Fortunately, I adore my editor and trust her experience and good judgment.

FQ: I was laughing out loud concerning Jules’ obsession with clean warm towels in that it sounded like she never had too many coming out of the shower growing up. Did you conjure up the concept of soggy wet towels always for Jules as a draw from childhood memories (and if not, what inspired you to use this as one of the recurring themes for Jules)? 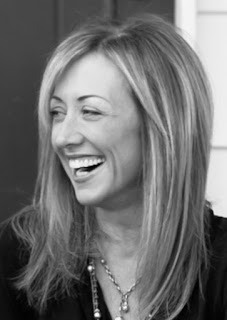 MCCARTHY: Jules is a bit of a martyr, for good reason in my opinion. She was forced into this caregiving role and while she resents it on some levels, she also couldn’t relinquish it if she tried. I come from the “show, don’t tell” school of creative artistry, and I just loved this metaphor for Jules. She can viscerally appreciate the idea of a warm, fresh towel and she wastes no time getting one for Lexi when she’s hurt. And someday, I hope the reader believes, she’ll treat herself to one.

FQ: I desperately wanted to use this next quote in the review I wrote and thought - Hmmm, maybe I shouldn’t’. Now that I have the opportunity to interview you, I figure, what the heck! There is a moment when Lexi is setting her sister up on a blind double date with her and her cop boyfriend. Suffice it to say, in my wildest imagination, when I turned the page and read the following scene, I thought I was going to hyperventilate I laughed so hard:

“Lexi was so proud of herself she wanted to pound her chest while swinging from a chandelier. To say that Brooke and Frank had really hit it off would be an understatement, unless Brooke had actually gone home with him after dinner to help him write some lame-ass report like they claimed. She’d seen the sparks flying between them, she was sure of it. Besides, Brooke taught preschool, not college English. Her students didn’t even know how to write their names! Lexi would bet her last push-up bra that her sister was riding that pig like a rodeo queen right now and not drafting up a rap sheet on some drug dealer or gang-banger. The thought made her beam in the darkness...”


Was this one of those moments when the passage wrote itself?

MCCARTHY: I love the set-up of this book, with the chapters alternating POV from Jules to Brooke to Lexi. Writing this way, I was able to be each character. I’d literally say to myself, “How do I feel right now? What am I thinking? How would I react?” At the risk of sounding like Neale Donald Walsch (or some sort of freak in general), when I write my novels, I truly feel like a conduit. I don’t plot or make elaborate flow charts or worry whether my plot points are “hitting” at the right spots. It’s just a feeling that something needs to happen; a wrench needs to get thrown into things right now. More often than not, I’d write for eight or ten hours and then save and close the manuscript and think to myself, “I can’t wait to see what happens tomorrow.” That’s the truth!

FQ: It is clear you were born to write. You have a distinct voice that is heard throughout your work and I wonder, when did you realize this was your calling in life?

MCCARTHY: Again, thank you! I never didn’t write. (I realize that’s a double negative, but it actually feels more accurate than “I’ve always written.”) I was submitting short stories to Highlights magazine when I was seven or eight, and my high school girlfriends and I would make little bound books for each other, typically highlighting our romantic disasters. I wrote for my college paper, and while my first job was in advertising sales for a small magazine, I was offering to rewrite the (patently crappy) articles for free because I intuitively knew they could be better—and frankly, because I knew I could sell more ads against stronger editorial. To me, there are few greater joys than the satisfaction that comes from crafting a perfect sentence or scene. The best is when I go back and read something I’ve written and think to myself, “Damn, that’s good. I couldn’t do that again if I tried.”

FQ: It has been a genuine pleasure to read your work and I thank you for your time. I cannot wait until your next title is available. Any indication as to when that will be (and are you able to share a teaser now)? 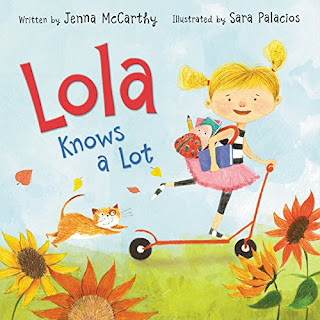 MCCARTHY: Seriously, how many times can I thank you? (Thanks! Mean it!) I am currently juggling about 378 balls, which is pretty much my happy place. Since my TED talk racked up a few million views, I’ve been fortunate enough to be regularly hired as a keynote speaker, and I have several gigs on the books in the next few months. In addition I have a children’s picture book, Lola Knows a Lot (the first in a series), coming out with HarperCollins this June, and another series based on a character named Poppy Louise who “is not afraid of anything,” that debuts next year with Random House. (Both of these are more than a little bit loosely based on my own brave and hilarious daughters, naturally.) I’m also working on a screenplay and a TV pilot, all while germinating the idea for my next adult novel. (Adult as in grown-up, not porn. I’ve found it’s important to clarify that.) Hey, if you know anyone handing out a few extra hours a day, would you give them my number?

Check out the book trailer for Jenna's book, If It Was Easy They'd Call the Whole Damn Thing a Honeymoon


Posted by FeatheredQuillBookReviews at 6:05 PM