FQ: I understand the setting of New York City but why choose the 1975 financial crisis as the story’s backdrop? What drew you to it from a writer’s point of view?

ZAHRADNIK: It all started when I set the first book of the series in March of 1975 because I wanted a time period before the typical tech tropes of today’s mysteries: CSI-instant DNA typing, facial recognition software that works in seconds, video-camera coverage everywhere, cell phones. That novel occurs right as the Vietnam War is ending—as opposed to when the U.S. pulled out—something I wanted to play off of. I decided the next time period for a book in the series should be the financial crisis seven months later, as there are several nice parallels between New York’s near bankruptcy and the financial crisis we’ve recently come through. Ratings agencies ignored warning signals and maintained ratings on bonds. Banks kept lending money because they wanted the fees. Lies were told.

FQ: You spent over 30 years as a reporter. What sort of news did you cover? Was there a deep-seated desire to be a crime reporter (or perhaps you were)?

ZAHRADNIK: I covered local news for newspapers in Westchester County, including one I owned, and it was there that I did some police reporting, though I can’t claim to have done a great deal of it. I actually started out wanting to be a political reporter. That never happened. After local newspapers, my career moved into business journalism and Internet news sites. I also did some work in cable news. Taylor has far more crime reporting experience than I do, and in many ways, is a better reporter than I ever was because of his single-minded focus. Other things distracted me. Building web sites. Soccer. Writing fiction.

FQ: As I mentioned in the review, I found Callahan’s struggles to prove herself to her fellow officers quite interesting. Any insight into what made a woman want to join the force back in the 70s? Did they have to be tougher than their male counterparts?

ZAHRADNIK: In Samantha’s case, I think it was because of her father and a subconscious understanding the times were changing. She’s not (yet) a table-banging feminist. I don’t have a deep insight beyond that except that as a teenager during that period I was well aware that women were pushing into many different jobs where they had not worked and were not at all welcome. Like Samantha, they had to be far tougher than their male counterparts because they were doing a difficult job and weren’t welcomed by the men. Who had their backs? This continued for a lot of years.

FQ: As soon as we learn that Johnny Mort was a dog lover who helped Alphabet City’s homeless dogs, it was hard to not like him and feel bad for him. Was this why you added the dog lover aspect to Mort’s character?

ZAHRADNIK: It did make him a sympathetic character. I needed Taylor to quickly find a small piece of evidence from his contacts that would make him question the police assumptions about the shooting. So really this is a case where a plot need drove character (though that’s not always the case, nor should it be).

FQ: “Talk to the dead cop’s wife” was something Taylor knew to do from years of experience. Was this something you knew from your reporter career or simply an idea you had? It seems too perfect a concept not to have come from somewhere.

ZAHRADNIK: I think a good reporter would always try and get to the nearest relative, particularly if there are questions about how and why someone died. The problem is the interview usually is the trite and terrible: “How do you feel now that your loved one is dead?” In cases of questionable death, you have to figure the spouse may have something that will help in the case. 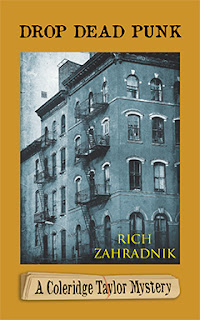 FQ: There’s a lot in the book about the police culture in New York. How did you research this?

ZAHRADNIK: Living in and around New York and watching police work helped a lot. For the corruption angle in the book, I read Serpico, which is the non-fiction book on the topic. I also read Fort Apache: New York’s Most Violent Precinct, which it was during the mid-seventies. And some of the culture comes from my imagination.

FQ: The characters of Rayban and Sally were my favorites. Were they based on anyone or entirely made up?

ZAHRADNIK: Totally made up, though I suppose as composites of many street people I’ve seen from the time I started visiting the city as a teen in the mid-seventies.

FQ: Are you still working as a reporter or did you leave that life behind to write mysteries?

FQ: I understand you now work with elementary school children and teach them about putting together newspapers. What is it like working with a younger crowd?

ZAHRADNIK: It’s great fun and a tonic for a fiction writer. Many a Thursday during the past four years, the kids turned a bummer of a novel-writing morning into the best day of my week with their ideas, enthusiasm and energy. One kid smiling at coming up with the interview, the lead or the great story idea was it all it took. They were enthusiastic about everything we’d try to do, which made a change from most newsrooms I’d worked in.

FQ: What’s next for Coleridge Taylor? Would you give our readers a peek into his next case?

ZAHRADNIK: The next book is set during the days around July 4, 1976, when the Bicentennial was celebrated in New York City with Operation Sail, a parade of 16 tall sailing ships and hundreds of smaller vessels through New York Harbor and up the Hudson River. Taylor will be covering this because he has to, but he’ll also be chasing a murder that appears linked to a drug war after a body is pulled from the harbor on the eve of the festivities. It’s titled A Black Sail, but that could change.

Posted by FeatheredQuillBookReviews at 9:33 PM