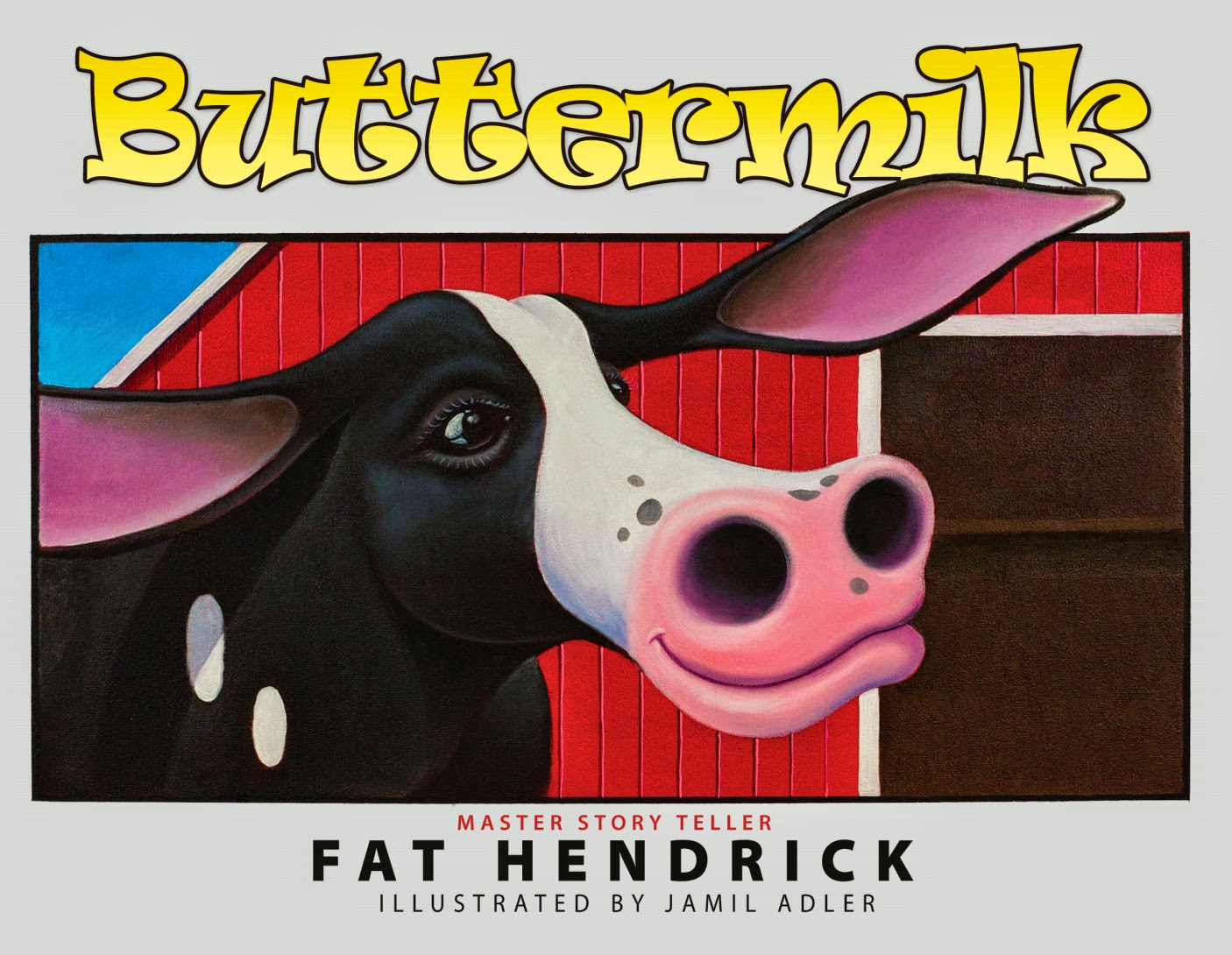 FQ: The biggest question: Where did this particular idea come from? Readers will definitely want to know.

HENDRICK: One day, when my twins were little, I saw a stuffed cow they left out on the floor. In an act of spontaneity, I decided, "I'm going to write a story about a cow," but I wanted something unique, something crazy, almost implausible. I began to think...what if this cow didn't give milk; what if it gave something different? What might a cow produce that you might hear as a rumor and think, "Could that be real?"

It struck me that when milk is churned enough, it becomes butter. Now I needed to figure out how and what might cause this phenomenon. Well...if the cow were moving around enough, and churning the milk inside of her, that might do it, but she would have to be moving an awful lot...what would cause a cow to bounce up and down and rock and roll back and forth enough to produce butter...what if the cow were dancing? The Mysterious Man from Tupelo was introduced and the rest, as they say, is "history."

FQ: When it comes to the background of your family, many things are stated. Can you expand on the amazing tale of the Van Wie family? Is it true that this book was written by his great (x10) grandson?

HENDRICK: My family history is true. In 1664, Hendrick Gerritse Van Wie paid eight full beaver pelts and four half pelts to sail from Texel Island in the Netherlands on the ship De'Endracht. He arrived in America right when the British were taking over New Amsterdam (Manhattan). According to the Kingston Papers, Hendrick Gerritse Van Wie was referred to as "Fat Hendrick" of Wildwyck. Fat Hendrick occupied a farm called Domine's Hoeck, which is now known as Van Wie's Point. He built a house in Beverwyck (Albany) and married. On August 11, 1691 Fat Hendrick, under the command of Major Peter Schuyler, was badly wounded during an attack of a large French force on August at Paray in Canada during the French and Indian War. He died soon after, leaving a line of Van Wies that still exist today. The Van Wies have been in every American war since, including the American Revolution. Now 350 years later, and after many, many years of researching my family tree, I am proud to use my Great-Grandfather's (x10) nickname, Fat Hendrick, as my pen name.


FQ: Was writing always a gift in the family – passed down through the generations? Or is writing a new path?

HENDRICK: When I was a young Boy Scout we went on a "Wilderness Survival Campout." You were allowed to bring a little food, a drop cloth and a sleeping bag. No tents, no matches, no comforts. There were four of us put together and we didn't know each other. We were told where to camp and then left to our own devices. We were very nervous being in the wilderness without any adult supervision and quickly began preparing our drop cloth and sleeping bag around a center location where we hoped to build a fire. We each went out and gathered all the things we needed for the fire...tinder, kindling and some larger logs if we were successful. As the sun began to sink, we gathered around our fire pit to cut off the wind as we each took turns sliding our knife down a magnesium striking stick, hoping for a spark. It wasn't long before all of our training paid off and a small spark started some smoke. We rapidly built the fire up until we could see that it would provide enough heat and light for all of us that night.

When it was completely dark, we were all staring quietly quietly into the fire, letting the heat settle our nerves. None of us was very hungry or had much to say. One of the scouts had a tiny flashlight, a breach in the rules for wilderness survival, and was reading a book. I leaned over, "What are you reading?"
"Where the Red Fern Grows," he replied.
"How far along are you?"
"Just started," he said.
As much as the cracking of the fire helped our nerves, I thought a distraction might be nice... "Would you read it out loud?"

All night we sat up taking turns reading the pages, listening intently to Old Dan and Little Anne's adventures. Our fears, concerns, and worries were gone as we were lifted away into the story, watching those dogs hunt raccoons, grow up together, and finally save their boy master Billy in the end. That night showed me the power of a good book and the impact it can have. I don't remember the location of my campsite, I don't remember the names of the other scouts I was with, but I never forgot how that book helped us all get through that cold night, huddled around our small fire. I knew then, that someday I wanted to write something that people could share as well.


FQ: What made you choose children’s books for the genre to write in? And are there other genres you have, or wish to explore in the future?

HENDRICK: While getting my master's in education, I spent a lot of time with children in the classroom. I remember being fascinated with their responses to quality literature, especially when read by a Master Storyteller. I love seeing the look on a child's face as he is sucked into a great story...when he is locked on every word as it hangs in the air like candy, and the pure silence in the room as students intently listen to a pivotal moment unfolding before them. There is a certain joy in children's books that capture young readers' imaginations, draws them in, and makes them never want to leave...I wanted to be part of that.

I am very excited to begin artwork on another children's book. I'm a bit of an American Revolution history buff so this story is children's historical non-fiction. It tells the story of a ten-year-old boy embarking on a sea adventure with his father to help in the American Revolution. What makes their journey even more dangerous is that his father has been labeled the number one traitor by the British, to be hung the instant he is caught.

FQ: Is Farmer Floyd based on a real person…seeing as that other ‘real’ people make an appearance?

HENDRICK: If you can find that lone dirt road in the middle of farm country lined with a worn, wooden fence and follow it over a small hill, you'll come down into a lush green valley. A fresh sweet smelling breeze will hit you as you make your way past the grain silo and at the base of the valley you'll see Farmer Floyd's blue house, red barn, and a quaint little guesthouse sitting in the middle of fields and fields of corn. As you make your way to the sturdy two story house and night starts to fall, make sure you listen carefully. In the distance, you just might hear some distinct music floating through the cool night air coming from an old phonograph player sitting on a window sill. And, if you're really lucky, you might even find a guest or two sitting on the porch with Farmer Floyd and Mrs. Mavis, playing their musical instruments, singing, dancing, and having a great time. They will surely invite you to join them and enjoy the music while they smile and ponder what strange event might occur in the morning...

FQ: Can you tell readers what’s next for ‘Fat Hendrick: Master Story Teller’?

HENDRICK: Farmer Floyd's Farm has not seen its last adventure. I have just finished the manuscript for the second book. A new visitor rents out the guesthouse and Farmer's Floyd's chickens have never been the same since!

FQ: I always end with a question readers love to know: Is there an author or personality, alive or dead, you wish to have lunch with…and why? (Hmmm…Is this a surprise, or will a young ‘plucker’ be the answer?)

HENDRICK: I think the Mysterious Man from Tupelo would have been an incredible legend to visit, however I was very fortunate to have dinner many years ago with the author of the Pulitzer Prize winning book John Adams (2001), David McCullough. I had helped finance the repair one of the original copies of the Star Spangled Banner and was invited to sit with Mr. McCullough at a dinner after the John Adams Library went on display at the Boston Public Library (I actually held some of the original books that John Adams owned and read). It was one of the true highlights in my life. So, to answer your question, if given a chance to have a lunch or meeting with any author or personality, I would love nothing better than to further discuss the American Revolution with another Master Storyteller, Mr. David McCullough.

Posted by FeatheredQuillBookReviews at 8:40 PM