FQ: In your bio, you address your years of Christian studies between Rome and France. You also include a tongue-in-cheek reference to the “historical Jesus” movement. Would you care to further expound on this notion?

At the risk of oversimplification, I would say that the historical Jesus movement rose during the twentieth century (and ongoing) in an effort to apply new ways of analyzing the historical documents traditionally used as a basis for Christian belief, i.e. the early writings of the first Christians, known as Holy Scripture, and other letters written by contemporaries in the first century. It was argued by some in this movement (which was both broad and individual for the most part) that this new way of analysis discredited the accounts of Christ's resurrection and thus discredited Christianity. The "historical Jesus", they claimed, was merely a good teacher, not the Son of God, if indeed he existed at all. Over the last twenty years these methods and claims, from my viewpoint, have been exposed as inaccurate, and I refer to this debate in The Magdalene Mystery. The movement greatly influenced Western culture, tapping into its Gnostic leanings, causing many believers to lose their faith. I consider this a great tragedy and a greater loss to Western Civilization as a whole, undermining the Judeo-Christian basis of our legal system, i.e. the moral underpinnings of our rule of law.

FQ: There is a dialogue between your characters Kelly, Daniel and Father Francis when they are at the Santa Susanna church I found to be quite moving: "We can know history in many ways. The community of Christians of the first century and the ensuing history of the Church all point to the historicity of the Resurrection...'God enters into a dialogue with the people he created, speaking through creation and even through silence, but mainly in the Church through the Bible and through his son Jesus'..." This is a powerfully moving and hopeful statement. I'm curious to know what inspired you to capture something so prolific.

The quote within the quote - 'God enters into a dialogue with the people he created, speaking through creation and even through silence, but mainly in the Church through the Bible and through his son Jesus’ I attribute(d) to Pope Benedict XVI. I have been inspired by many authors who have considered these questions at greater depth than I have and with far more appropriate credentials (I include a bibliography of some of them), authorities I can trust because they are qualified. I am convinced from my reading that the tapestry of the history of man is largely the tapestry of God and his love for us; it is beautiful, hopeful, powerful, exciting, a glorious conversation. God has and does speak to us through his Church, his son, and his Holy Spirit. This is the Good News of the Resurrection. It is natural to deeply desire the proclamation of this good news.

FQ: I sense you have a strong Christian-based faith as well as an innate commitment to dissuade "urban legend." The world is full of opinionated people and while the subject matter of your book is extremely fascinating and heart-felt, have you experienced any abject negativity because of the subject matter? If so, how do you overcome the negativity?

So far, everyone has been positive, kind, encouraging, and have kept any negativity to themselves. For the most part readers have expressed appreciation that their own concerns, beliefs, and thoughts were being aired and in a fictional format. Atheists and agnostics have said they see my novels on a symbolic level, mythic stories about man and his search for meaning, etc. I can't change hearts and minds; I can only tell of what I have experienced to be true, and what my reason has led me to believe to be true. Life is full of negativity, suffering exists, we are a fallen world. I overcome negativity and suffering, of any kind, by offering them to God to be redeemed by his grace. If I found a cure for cancer of the body, I would feel compelled to share it. Just so, I feel compelled to share this cure that Christians have found for cancer of the soul. If the cures require certain behaviors, i.e. diet and exercise to prevent cancer or following the Ten Commandments to cure one's soul, there will be some who find the discipline too hard and react negatively.

FQ: Lester Sansby's character was sinister, dark, borderline creepy and I gather, quite the agnostic. Was your intent in developing such a distinct opposite persona of the main characters to broaden the appeal of the story to a wider and more diverse audience?

No, to widen the audience in this way was not my particular intent. I did want to broaden the appeal of the story by creating dramatic tension. For me, it is difficult to develop characters like Lester, to dwell on this darker side of human nature, but in a novel there needs to be an antagonist with whom the protagonist must wrestle, whether interior or exterior.

FQ: When it comes to Christianity and faith in general, we have the next generation to think of as to what path religious studies take. There was a fair amount of suggestion in your book that eluded to the changing face of theological study—almost to a point of the next generation seeking the answers via the internet and blogs. Do you think there will come a time when traditional churches and houses of worship in general will take a back seat to the internet highway for such information? If so, why?

I hope not. Christianity is a sacramental religion, physical and present in real time. Traditional churches offer this and the Internet does not. We use water for Baptism, bread and wine for Holy Communion, oil for Unction, spoken words for Confession, Matrimony, Confirmation, and Ordination. I do hope that the next generation trundles right down to their bricks-and-mortar church. I hope they sit in real pews and sing real praises to God, alongside one another. I hope they meet and greet with hands and arms outstretched, sisters and brothers, a family of God. Theological study is already available through online classes and colleges. The Internet is invaluable for long distance learning. One compliments the other. Online study compliments worship but will never replace it. 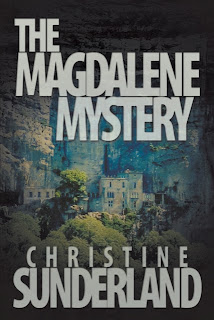 FQ: I cannot help but think there are places you have described in your book that are perhaps more fact than fiction. Of your many travels between Rome and France, what church stands out most in your experience and why?

All of the churches are factual settings. Each one has a different personality, so it is like comparing people. They each have a different history and different present, different congregations and different religious orders caring for them. They are all beautiful and inspiring, and they are all equally important because their central focus is the altar, the worship of God. My husband and I enjoy worshiping at Santa Susanna, the colorful frescoed American Church (they have my books in their library); we were happy to meet Father Paolo at the lovely Baroque Santa Maddalena (his Order of Saint Camillus are celebrating their 400th anniversary this year); we marvel at the marvelous Santa Maria Maggiore, the stunning Santa Croce, the white marbled Lateran Basilica. Each is an incredible experience just to cross the threshold. Each opens a door to the past and to more marvels.

FQ: Your character Kelly has a recurring dream where she is climbing to a place that seems so serene in the way you have described it: "...as she climbed, she heard a distant melody, feather-light and in a major key, or was it minor now, weaving through her, louder with each step, a harp or a violin or a piano. She climbed, full of fear and hope and wonder..." My interpretation was perhaps she was experiencing a prelude to what Heaven could be like. Was that your intent?

Yes, there was a hint of Heaven calling Kelly in these dreams and I think we often dream of Heaven, of flying, soaring. We long for something undefinable; we yearn and we dream. It is possible that Heavenly beings - our loved ones or angels - visit us from time to time for many reasons. I'm not sure how this happens, what the rules might be, but somehow a veil is pierced. I think love must be involved for the veil to be pierced.

FQ: Thank you for your time Ms. Sunderland. For me, The Magdalene Mystery was full of intrigue and mystery as much as it was a fascinating educational account. Are you currently working on a new project? If so, would you be willing to share?

Thank you. I have many images and ideas for the next novel. They are still a jumble and need some sorting. We shall see if they come together and form a plot and compelling characters that readers might like. I have an image of an altar that becomes a door to safety. Music may be involved, a concerto perhaps. I see a priest walking the sidewalks of an ordinary neighborhood in suburbia, praying for the people in the houses. And many more such images. I've written some scenes and created some outlines. We shall see what comes!

To learn more about The Magdalene Mystery please read the review at: Feathered Quill Book Reviews.

Posted by FeatheredQuillBookReviews at 11:11 AM