FQ: Leah Tallent is a great character. With her total dedication to libraries, I have to ask – is she, even remotely, based on YOU?

Oh, yes. Not the looks, however. She’s way better off in that department (LOL). But when it comes to sarcasm and witty banter, she definitely gets those jokes and gifts from her creator. Libraries, as well, are definitely my thing. Some women like high heels, some like television, some like hot guys in the movies, I have always wanted only one thing - to live inside the New York Public Library and never have to leave.


My mother, THE most fantastic woman on earth, is a career librarian. I don’t remember a time when Mom didn’t have a book in her hand. She taught my sister and I that books were the essence of humanity. Laughter, realism, heroes, damsels, action, adventure, horror - writers could bring everything into your world and you could learn something all at the same time. Books increase your intelligence and feed that huge imagination I have. And being able to walk up those stairs of the NYPL between Patience and Fortitude for a book signing would be the greatest gift I could ever be given. 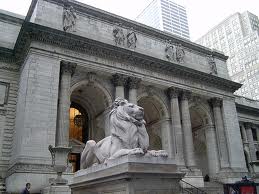 FQ: Is Gareth Lowery every woman’s dream date? Does he have any flaws other than his obsession with finding the entrance to Heaven?

Well, yes. But Gareth can be a real pain, too. In the book he certainly stands for the handsome, smart, James Bond meets Indiana Jones meets 24 guy, but he also has that pompous side where he does believe he could get any woman with that smile of his. But he meets his match with Leah. She can see through all that ‘stuff’ and becomes the perfect partner for him. I think that’s what makes the romance ‘simmer’ and then finally erupt in this book, because these are two people who are the perfect balance for one another. He’s also FAR too trustworthy. Whereas Leah trusts absolutely no one, Gareth seems to be way too easily ‘swayed’ - that’s another reason why he needs her because she can always see any serpent in her garden. And he has the belief and faith, whereas Leah only believes in books and herself. So he teaches her a few things, as well - even though, of course, she has to be right.


FQ: Where did the idea for 13 come from? Had it been swirling around in your head for a while?

Oddly enough, it came from a very boring day at work where a colleague and I were so caught up that we had nothing more to do (which never happened). She was reading her horoscope off the computer, and as I looked at the screen, there was a mention of the 13th sign and a name, ‘Aleister Crowley.’ From then on, I was on a serious mission to put together a puzzle that fans would love as much as The DaVinci Code, and add a little more heart and soul to it.


FQ: I loved the use of real places to search for the missing orbs. Why did you decide to go with “real” vs. imaginary?


There are so many tremendous locations in this world, and the history they all have is so immense that it’s far more believable to create my mysteries; that amazing ‘link’ that leads the reader down an unknown path. Fantasy locations wouldn’t have worked because this book is, in essence, based on history and very REAL things that happened - even though they are little-known facts. Some of the most amazing comments I’ve received is that readers are running to Google after reading the book and looking these places up to see if I was kidding...and I wasn’t.


FQ: My favorite “real” place was Winchester’s mansion. The history around the estate and its owner, Sarah was fascinating - and, yes, I did look her/the house up on the internet. Have you ever been to the mansion?


Not yet. And I SO want to walk those halls. I purchased videos, books, spoke with people about their experiences there, and was completely and utterly amazed and intrigued by the back-story of the Winchester House. I knew a little background on it beforehand, and I focused on the house because I knew Sarah Winchester was more than a little obsessed with the number 13. She had 13 bedrooms, 13 hooks in all her closets, 13 drains in her sink, 13 panes in some of the windows - and knowing that Aleister Crowley actually did visit San Jose during that time period made me wonder if he actually could’ve been the one to start all this. I do hope that this book gives the Winchester House even more publicity, because that is truly one of the grandest mysteries and coolest places in America.


FQ: There is also a lot of history behind each and every place/person that Leah and Gareth search for. Did you have to do a lot of research when writing the book?

Again, I give all the credit to my mother, bringing me up with a book in my hand. I have actually studied archaeology and history my whole life, and I love mysterious legends, locations, and historical people. That background gave me a really good start for all of these books to be written. And, like Leah, I LOVE research. The one other thing Leah and I have in common is the fact that I feel like my brain is a card catalogue some days. When someone asks me a historical question, I can usually find it in there. If not, Google can certainly fill in the blanks!


FQ: There’s also a bit of Astrology in this book. Do you read your horoscope on a daily basis?

Actually, I was never really into the whole horoscope thing, but I LOVE astrology. I love the beginnings of astrology back in Ptolemy’s day, and was extremely interested about the 13th sign and how it was actually something that the Pope decided to erase, for reasons that are in the book. Not to mention, the 13th sign was used for the AMA logo and other things over time.


FQ: Since this is the first of a planned 7 book series, would you give our readers a little peek into what they can expect in subsequent books?


In the next - The Sapphire Storm - (which is my mother’s favorite) Leah’s whole life is opened up to reader’s - from where she lived to meeting her slightly odd family members. A journey takes Leah and Gareth to England where an old mystery surrounding Shakespeare leads them to Pergamon, as well as other locales, and an old monastery that was actually the site of a little known event that will have readers absolutely stunned. And, of course, the man on the text messages in 13 is revealed. The third involves Greece and a strange mystery that unfolds in the basement of an old Athenian temple; book four is based on a treasure that Hitler once sought - and FOUND - that hardly anyone knows about but is true; book five is a thrill ride that goes from America to the depths of Knossos Palace; book six is based a great deal in Russia and surrounds an object that is almost completely unknown by the world that Faberge made for the evil Rasputin; and book seven is a huge conclusion that ties up all the stand alone stories and will bring readers back to the steps of that amazing library. I have worked for years on these puzzles, making sure that they could stand alone, yet also flow as one series that would awe and captivate readers (which I hope it does).


FQ: Donovan Barker is one man the world would be better off without. But alas, I suspect he may reappear in future books. Yes?


Let’s just say that this is not an ordinary series, so expecting the unexpected is really the way to go here. Even though Donovan Barker might seem bad, he’s actually not the ‘bad guy.’ There are many introduced, and the man texting Donovan on that phone in 13 will prove to be a much larger adversary.

To learn more about Tallent & Lowery: 13 please read the review at: Feathered Quill Book Reviews.
Posted by FeatheredQuillBookReviews at 9:33 PM