The Ducks of Boston

Regular readers of our review site, Feathered Quill Book Reviews, may recall a review I wrote back in October of 2010 of Robert McCloskey's classic Make Way for Ducklings.  Not exactly a recent book (originally published in 1941), but heck, I just love the book and wanted to share it with others.

I bought myself a lovely, embossed edition while on a trip to Boston last Fall.  It's kept on my shelf of favorite books (how many people have such a shelf???)  Anyway, last week I had to go into Boston on business and decided to extend the trip to spend some "girl time" with my teenage daughter.  She'd just finished her first year at Boston University and her favorite thing about Boston was feeding the ducks on the Commons.  Hmmmm......can you tell we're related?! 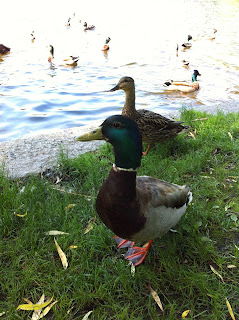 We actually planned ahead and brought a whole loaf of bread with us.  As soon as the ducks heard the rustling of the bag, they came swarming over to us.  These guys (and gals) are not afraid of humans - except for the sugar-crazed little kids who thought it fun to chase the poor ducks.  One duck actually crashed into me (on purpose I think - for protection) as one wild child - with a nanny who was busy on her cell phone and ignoring her charge - ran after a particularly friendly duck.


Some of the males were quite friendly, others a bit aggressive toward the other ducks.  One must have been 'Boss Duck' as he squawked at the other ducks the entire time.  The females were quite friendly and much sweeter to their neighbor ducks.
We had a wonderful time feeding the ducks and plan to visit them again on our next trip to Boston. What about all those ducklings that Robert McCloskey wrote about?  We only saw one duckling and one teenage (still had some down but on his own) duck.  The rest must have been hiding on the little island in the middle of the pond.  There was a fenced off area where we saw a pair of swans and a bunch of ducks so perhaps that's where they were. 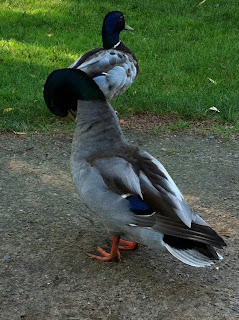 Oh, yes, and we just happened to be in Boston when the Bruins played their final, Stanley Cup winning game.  The statues were dressed for the occasion: 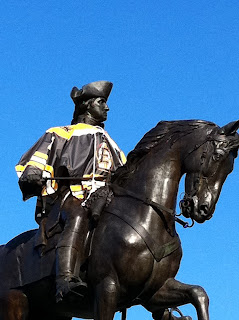 And we joined in the festivities on/around the Commons.  Fans were hyper/happy but all that we saw behaved and there were no problems.  Also a TON of police but they just stood around and smiled. 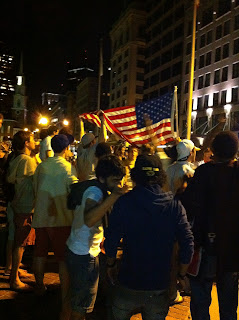 Posted by FeatheredQuillBookReviews at 12:07 PM