Today we're talking with C.S. Lakin, author of several books including The Map Across Time: Gates of Heaven Series (Book 2)


FQ: When you were raising your family and running a bed and breakfast you somehow found the time to write “three novels and a cookbook.” Many people would consider that to be an extraordinary feat. How did you manage to sneak in writing with all your other obligations?


It’s like finding time to do anything you love. I am constantly amazed at author friends I have that pump out books and hundreds of magazine articles each year while raising four or more small children. I know a lot of it is time management and getting little sleep! That’s how it was for me writing my first three novels. Now, with my kids raised and working at home, I have so much more time to write and the books get done quicker, which is such a blessing. But it also reminds me not to squander precious time.


FQ: Since those first few attempts at writing you have suddenly burst on the scene with several amazing novels, including Someone to Blame, winner of the Zondervan First Novel competition in 2009. You mentioned that this story is being considered by Lifetime TV for a TV movie. Can you tell us a bit about this story and the impetus behind writing it?


I kicked around the idea for years of turning Agatha Christie’s Murder on the Orient Express into a contemporary psychological suspense, so I set the story in a small coastal town rather than a train. I loved the theme of blame, and at first intended to have the whole town turn on the antisocial drifter Billy Thurber with good reason. The story morphed into more of a look at how we so often judge on appearance, without knowing someone. My books are heavily thematic, and my aim is to get people to think about themselves and how they view the world. By presenting Thurber from a multitude of viewpoints—the locals who interact with him—I hoped to show that each person brings judgment to the table based on their own insecurities and inner fears. Each person who encounters him reacts to him differently, and Thurber’s antagonistic behavior pushes them to respond. At the end of the book, though, I hope the reader sees how he or she has also done a bit of hasty judging, and gives pause for some self-reflection.


FQ: Another series you have begun to develop is The Gates of Heaven series. Two installments, The Wolf of Tebron and The Map Across Time, have been published and are attracting the attention of a wide audience. You claimed that Map was your best book to date. Perhaps you’d like to qualify that statement and tell us about this series. 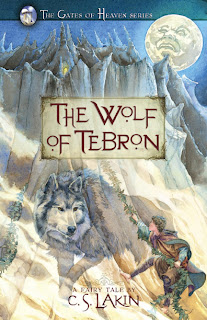 Map across Time is my favorite book in all the world because it so much touches on what I struggle with in my heart. Adin is the teenage prince who feels unloved and inadequate to do anything special with his life. He has physical deformities as well as a father (the king) who despises him for his flaws. Yet, as the story unfolds, Adin learns heaven does not have the same flawed human value system. Adin feels throughout his quest to find the Keeper (as he travels back 300 years in time to his kingdom’s infancy) that he keeps failing. It is not until the end does he realize everything that happened had God’s will and purpose in mind. We so often look at the surface of things and can’t see God in it. I believe God means our good and does accomplish amazing things through us, even if we are completely unaware.


The Gates of Heaven series is a collection of fairy tales for adult readers. They take elements of traditional tales (like wicked stepmothers and magic mirrors) but they are brand new storylines and characters. My aim is to create tales in the classic tradition but, as you know, most fairy tales are only a few pages long and don’t go deep into character. So I wondered what it might be like to write such tales hundreds of pages long, but still following the “rules” of fairyland.


The premise behind the series as a whole is that there are seven sacred sites or gates of heaven that had been established on earth ages ago meant to prevent evil from getting a stronghold in the lives of men. But over time these gates have been torn down, desecrated, fallen to ruin, and that has allowed evil to spread. Each of the seven books features one locale of a “gate.” And each book reveals the “Keeper” of the gate—the one appointed by heaven to watch and protect and direct events so that evil cannot prevail. The books are slotted to come out about every six months, so watch for the next installment this fall—The Land of Darkness.


FQ: Everyone has a little once upon a time story where they can pinpoint exactly when they began to write. You claim that you come from a family of writers, but what is your story? Were you one of those little girls who had a diary and wrote little stories for fun and entertainment?


I’ve been writing poetry, short stories, screenplays (bad ones!), and songs for as long as I can remember. I never intended to become a novelist but stories just swam in my head and I had to write them down.


FQ: You do have one, as of yet, unpublished mystery entitled Conundrum. You said it was a “grueling” novel to write. Few people know about this mystery, but perhaps you’d like to give us a privileged upcoming preview of the plot.


I actually have six unpublished novels I am trying to sell right now. Conundrum is mostly autobiographical although a mystery. But it delves into the betrayal my mother fomented against me and my family and I had to draw a lot from that to write the book. I didn’t want to write it but after I had prayed hard about what to write next, God gave me the entire book idea, the first chapter, title, themes, and motifs in a dream, then confirmed it right after with a second dream. I’ve never had that happen before but I guess God knew I would never have written the book if I had thought of doing it. I was faithful to the task although it took me through a year of depression and pain.


FQ: Most writers seem to stick to a single genre, but you seem to float with ease between several, yet all are Christian based. We’d enjoy hearing about your faith and what part it plays in your writing.


Our faith is our life and it spills into everything. I hadn’t planned on writing fantasy, since I’d been writing mysteries. But I took ten years off after being discouraged at not getting published. Then I prayed to God to revive my love for writing and asked him to show me what to write for him. Without going into the long story of it, he made it quite clear he wanted me to write fairy tales. Okay, that was a surprise. No one was writing fairy tales, let alone ones Christian –based. Yet, traditional tales are full of Christianity since most of those writers were coming from that place of faith. Often in fairy tales characters cry out to heaven or angels aid them. So I thought I would now just write fairy tales. Yet, in the last few years, I’ve had other stories burn in my heart to write, so I wrote them too. I just completed a huge family saga, a contemporary story of Jacob and Joseph, which has been a wonderful journey of writing. I’m trying now to figure out what publisher might actually be interested in it, as I wrote it in literary style for the commercial market, yet it is strongly about trusting God to lead you out of the wilderness to his promised land.


FQ: If you could step into the future and enter a bookstore to catch a glimpse of a display of bestselling books and one of yours was among them, what would that book be about? How do you feel you can improve your work in order to reach such a goal?


Wow, I would love to see all my books there, but I have to trust God will get my books into the hands of those who need to read them—whether that means they sell big or not. As far as improvement, I always feel I have so much to learn and improve upon. I’m about to take the week-long writing intensive with agent Donald Maass to see how I can write better. I think everyone who feels called to any task should make it their imperative to always improve upon their skills—whether it be writing, surgery, or parenting.


To learn more about The Map Across Time: Gates of Heaven Series (Book 2) please visit our website and read the review at: Feathered Quill Book Reviews.


To learn more about Someone to Blame please visit our website and read the review at: Feathered Quill Book Reviews.
Posted by FeatheredQuillBookReviews at 7:59 PM

Labels: c.s. lakin, gates of heaven, map across time, someone to blame