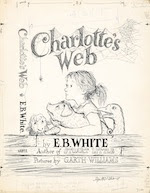 Featuring the image of Fern and Wilbur gazing at a dangling Charlotte, Garth Williams’s original cover art for E.B. White’s Charlotte’s Web sold at auction on October 15 for $155,350, more than five times the pre-sale estimate. This figure sets a world record for the sale of any art created by the legendary Williams, who died in 1996 at the age of 84.
The artist’s family consigned 42 of his original illustrations for Charlotte’s Web to the auction, which was conducted in New York City and online by Heritage Auctions. The works brought a combined total of $780,245; one endearing illustration—showing a smiling Wilbur standing below Charlotte’s web, in which she’s spun the word, “TERRIFIC”—alone fetched $95,600.

This interior image from the  book  went for more than $95,000 at auction.
“The response to the Charlotte’s Web art was tremendous, especially the iconic cover art,” said Barry Sandoval, Heritage’s director of operations for the comics and original comic art auctions. “It just shows how universally beloved this book and this art really are.”
“Charlotte’s Web feels as fresh today as it did when it was published 58 years ago,” said Susan Katz, president and publisher of HarperCollins Children’s Books, of the book’s longevity and appeal. “In many ways, it is the ultimate story of childhood and of growing up, told with elegant understatement. The universal themes of friendship, loyalty, and loss have led several generations of children to cherish this tale.”
And the novel, which has sold more than 25 million copies, shows no signs of slowing down. “Not only is it a cornerstone of our history as a house,” Katz said, “it proves every year to be an enduring bestseller.”
Posted by FeatheredQuillBookReviews at 3:11 PM