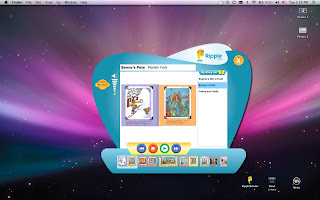 The Internet does nothing if not connect people, and Colorado-based Ripple has created a platform that uses the Internet to transport the intimate experience of reading a book to a child across long distances. Basically, Ripple is a Web-based audio recorder and player that also displays the pages of children's books. The idea is that a traveling parent, a long-distance grandparent, or a deployed soldier, for instance, could record the text of a children's book and then send a file with their recording, along with a digital version of the book, to a child. "We're all about connecting familes," said Mariah York, author/publisher representative at Ripple.
Right now, Ripple is building its library of books it will have the rights to sell recordings of. The deals are still in the works, so York can't announce any particular titles, but she said, "I'm working on some pretty amazing stuff with big names. I am talking to individual authors, indie publishers, and very large publishers about posting their books to our library." Ripple plans to launch to consumers in the fall.
Ripple presents an interesting situation in terms of rights to the books. "Basically what we're asking for is the digital right to post the book in its entirety on our site. One of the reasons it's taking a while is it's a brand new technology and publishers are trying to find a way to fit this into their rights deals. It's not an e-book, not an audiobook, not really software. What's separating us is it's a personal recording, nonpublic," said York.
A screenshot of the Ripple player.The person buying the recording will interface with a special recording site, on which they'll see a large version of the book they pick and make their recording. Then, they'll email the recording to the recipient packaged with a version of the book that will appear smaller on the screen in order to encourage reading along with the print edition. York says the files will have full DRM to protect intellectual property rights. The audio recording is only available through Ripple to the person who recorded it, who can send additional copies to other recipients at a discounted rate. A single recording will cost $9.95, and there will be three other packages available for 4, 12, or 24 recordings, with the price per going as low as $4.58.
A few factors make Ripple an especially attractive deal for publishers: first, the company is asking for non-exclusive rights to post books, meaning a publisher can still sell their books as e-books elsewhere. Ripple also sees the physical book as an integral part of the children's book experience, so the company will initially post a link to whatever e-tailer the publisher wants to buy a physical copy. Down the line, the company plans to sell physical books through its own site. Publishers will get $1 per recording sent, no matter what package the consumer buys.
More news to come as deals are announced.
Posted by FeatheredQuillBookReviews at 11:15 AM