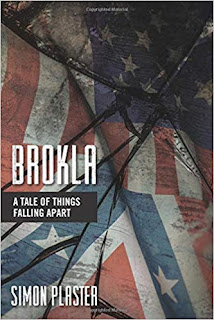 Today, Feathered Quill reviewer Amy Lignor is talking with Simon Plaster, the author of BROKLA: A Tale of Things Falling Apart
FQ: As a master storyteller who has some strong points, to say the least, talk about politics of 2019. Readers and fans want to hear what you have to say about the “world of Trump” and the “path” the U.S. is on as we speak.
PLASTER: Readers and fans ought to buy my latest books if they want to know what...Excuse me, Amy, could we just skip ahead to that question you mentioned about the publishing business. I have to get on a Greyhound Bus in a matter of minutes.
FQ: Your views on today’s authors: Who is doing it right, and what would be the one thing you would change if possible when it comes to the world of publishing?
PLASTER: What I would change is my own dang publisher, from Mossik Press to someone who is a heck of a lot better at marketing; that’s what I would do. The Mossik bossman out there in California, Marty Lowry; he talks a good game on the phone, but...Well, here I am, in Del Rio, Texas, for a book signing event that the sumbitch set up. I had to pay my own way to get here before finding out that the Mercado Poco convenience store only had two books in stock; neither one of them mine and both in Spanish. I went ahead and signed them, but won’t make a penny off the deal.
On the other hand, I guess I should be thankful not to be stuck in a kibbutz over there in Israel, where Marty also wanted me to go, on my own dime. He says Plasterworks sell like hot knishes in the Holy Land, but shekels coming my way have been sparse.
I know, I know; I should have checked into Marty Lowry’s background before I got in bed with the sumbitch, but...Only long after the fact — I had already sent nine or ten typed-up tales out there — did I find out that the word “mossik” is Yiddish, and means “prankster.” So I guess the joke’s on me.
FQ: What’s up next? Are you working on Henrietta’s next tale? Or is there a different book in the works?
PLASTER: My latest tale is already in Marty Lowry’s hands, and — dang it — I only typed up that one copy. Henrietta rides again, alright. I can’t tell you the title, ‘cause I forgot to make up one, but I can tell you this: The tale replays a big event that took place almost a hundred years ago — one of the most important events in American history that led directly to the election of Donald Trump — though not ten out of a hundred people now living have ever heard of it; nine of which have a misunderstanding based on a motion picture account. Henrietta snouts out a couple of villains patterned after sumbitches thought of by most to have been heroes. I have not yet heard back from Marty Lowry on the matter, so can’t say if or when...Sorry, Amy, I’ve got to get on that bus and head up the road to Odessa for a book signing at an Arturo’s convenience store. Hasta la vista, my dear.
FQ: Thank you once again for bringing Henrietta and her wit into my world. Have a great day!
Posted by FeatheredQuillBookReviews at 10:58 AM