#BookReview - The Palladium by Thorsten Brandl 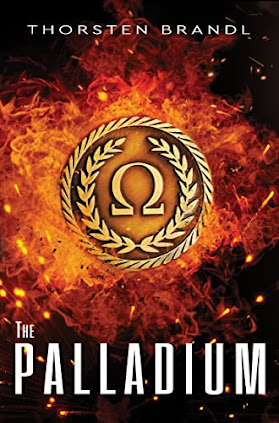 The Palladium is a fast-paced fantasy thriller about an unemployed fiction writer named Michael Baker who takes a chance at a monetary prize he hears announced over the radio. He could really use the $500 US dollars, even if the money is from a radio station that exists in a nebulous liminal space. Winning this prize entangles Michael in a bizarre drama involving a mysterious Circle of characters who must fight a battle with "them" (slowly, the reader learns the identity of "them"). The stakes are high, and the fate of humanity is in Michael Baker’s hands. He is not hero material. Will he rise to fight the enemy? The vague and suggestive plot developments keep the pages turning. The author is skilled at mystifying and setting up cliffhangers at the end of each chapter, making this book hard to put down.

The central action takes place in 1996, in the German city of Karlsruhe. The radio station exists on the sixth floor of the Orchid Hotel, a hotel with only 5 floors. The charming DJ plays top hits from the 60s, 70s, 80s, and 90s; but, is he just a DJ? Hit songs accompany the dramatic ups and downs of Michael Baker’s story. Michael visits a series of unusual settings that the characters access through portals that open after they draw doors on walls with a piece of white chalk. This novel re-imagines Dante’s Inferno and Classical Greek mythology in this modern setting, giving this story a perfect blend of timelessness and urgency.

The characters surprise us too. Michael is not a hard-boiled fighter. He expresses genuine fear, which makes him relatable. He experiences confusion and doubt, and when the tension is at its peak, he surprises himself. This is an honest portrayal of a common man thrust into unusual circumstances. A popcorn salesman at a zoo reveals a demon face, signaling desperate threat levels. No place is safe, and it is up to Michael and the Circle to restore peace, if they can organize themselves and get along.

When Michael learns that he is Omega, and another Circle member who he saves from a bullet wound, Cleo, is Gamma, the reader wonders whether or not their relationship will develop into a romance. Readers are left in the dark, with Michael, as to what Omega and Gamma really mean. Are they ancient members of the Palladium? What’s the significance of the crest? What will happen to Michael if he sees a mysterious woman’s true identity? Not only does the reader receive satisfying answers to these questions, but there is also a fulfilling emotional arc.

The narrative development gives the reader a feeling of spiraling deeper and deeper into the heart of an ancient mystery. Elements featured in this book include a charming canine companion, tough female characters, seduction, sexual tension, gun violence, bloody deaths, diabolical evil in game play with enigmatic divinity.

Quill Says: The Palladium is as thought-provoking as it is suspenseful, giving readers a unique, vicarious experience of the battle between primordial good versus evil.

For more information on The Palladium, please visit the publisher's website at: www.catseyepublishing.com

Posted by FeatheredQuillBookReviews at 5:29 PM