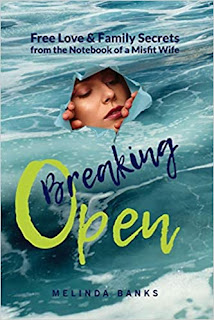 Breaking Open: Free Love and Family Secrets from the Notebook of a Misfit Wife

Melinda Banks’ early-married, late-90s lifestyle to Pierce would be considered normal; normal, defined as the husband works outside of the home and stay-at-home wife cares for the kids, running interference throughout her husband’s working-hour days. Living this way did not cut it for Melinda since their sex life slowly drifted away from what they once had pre-children. Fifteen years later and now working outside of her home, Melinda has an affair, which eventually gets Pierce and her rethinking their marriage.

After addressing her internal struggles, Melinda suggests counseling for the two of them, and the counselor comes up with a plan. It’s not until they return home that Melinda opens the proverbial can of worms. The expected hurt, mistrust—the whole nine yards—unfolds.

It’s amid hard conversations that Melinda raises the idea of open marriage—not a far-fetched concept, considering that Pierce and she had a taste of polyamory on their honeymoon. Unsurprisingly, the notion strikes a chord, and they propose their idea to the counselor, who is utterly unprepared for their turnaround response. What follows is a one-year exploration with lovers—even in a minivan.

Melinda Banks pens a fascinating read into the world of polyamory. One would think her narrative is filled with page-after-page of erotica, but it’s not. There is no doubt that sections are replete with those salacious tidbits; however, Banks takes a step further by providing her audience with a whole lot more relatable material than the fixations of a hormonally-driven housewife.

Far too often, the strain of raising a family goes in direct opposition to maintaining a healthy sex life, and all too often, partners find themselves left frustrated. Married “been there, did that” women (especially Christians) reading Breaking Open would be in denial if they refuse to acknowledge the trials and tribulations that come with being married with children. Banks does not mince words as she draws attention to emotional details of her journey, which speaks loudly to the dilemma many marriages have had and continue to face.

Banks sprinkles her first-person narration with journal entries, essays, and even some free-verse poetry and places them within short flowy chapters, divided into subsections. The balanced combination provides readers with an appealing, quick read.

Quill says: Breaking Open is a well-written read that is heart-wrenching, eye-opening, and sexy all at the same time.

Posted by FeatheredQuillBookReviews at 10:55 AM