FQ: This is an incredibly honest book. Can you tell/explain a bit about Jerry’s writing experience? Such as, did he bounce his stories off you, or was he more of a man who quietly reflected in front of a computer screen and then gave you the entire book after it was completed to read?

HALL: It is a brutally honest book! Jerry had written a manuscript of this book in the late 1970s. at the time he was told no one wanted to read about Vietnam. So he worked from that original base. I converted all the typewritten pages for him and he would be at the computer writing almost possessed for hours on end. He had me review what he had done almost daily. It was very much an open collaboration. He also had some other trusted people occasionally read and comment as well.

FQ: It is certainly difficult for veterans, but it is stated that dealing with their nightmares once home are even more difficult for their wives/husbands/families. Can you speak a bit about the issues Jerry was dealing with when you two met?

HALL: Betrayal was big, he was very much all or nothing. If he perceived someone wronged him he was incapable of finding middle ground. He was very vulnerable and guarded at the same time. When we were alone he would break down crying and I would hold him for hours and he talked about his losses, but then the steel trap would enclose around his heart and it was over. He could put on a ‘happy face’ and entertain when he needed to so many people had no idea of his pain. He rarely was at peace. Nightmares were commonplace and more than once I ended up on the floor because he thrashed about.

FQ: Being a memoir, of course, all his characters are real. Did he speak a great deal about the “fantastic four?” And was there one particular humorous story that he loved to tell?

HALL: He did talk about them a lot – he spoke of those training days with excitement. He must have told me about graduation night when he took his dad into the bar to drink with the “Four” a hundred times. He was so proud.

FQ: In this, an election year, can you talk a little bit about what Jerry would think in regards to these two nominees? Did he have a specific President that he believed in or he thought best served this country?

HALL: He, like so many of his generation, was a Kennedy man. No one came close for him afterwards. He felt a strong moral responsibility to help those less fortunate and marginalized and thought the Democratic party did a better job of that.

FQ: Did Jerry comment about watching the indifference for Korean and Viet Nam War veterans change as time went on? In the 80’s and 90’s they eventually became accepted and supported, for lack of better terms; monuments were finally erected, etc.?

HALL: He took pride in the fact that Vietnam vets did their own monument etc and essentially said FU to those that put them down on their return. I don’t think he ever really felt accepted by his country though. He was very skeptical of the flag waving and what he felt was false patriotism by the general public. That is partly why he joined and became commander of the local Disabled American Veterans (DAV). He wanted to work with vets, whom he trusted, to raise the level of understanding and respect for all those who fought for this country, living and deceased. 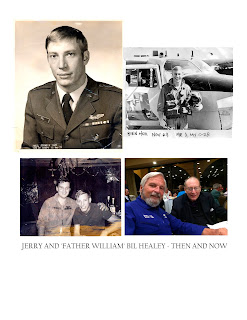 FQ: Did Jerry have any opinions as to the new brand of war that now comes with terrorism?

HALL: He acknowledged that it was not a traditional war. He was torn between having American boots on the ground and letting the Arab nations solve it themselves. As the attacks progressed in recent years, he knew he was dying and it wasn’t his fight anymore.

FQ: Was writing therapeutic for Jerry? And how did he feel when he heard that statement: “we are publishing your book?”

HALL: It was extremely therapeutic for him. It was part of what kept him going through his cancer, to finally get his story out of his gut. He so wanted validation of what he went through, to repair his soul and pass on insight. I promised him I would do whatever possible to get it out into the world and he believed that. I think for him the bigger moment was when the professional readers report came in with raves, he was in his final days then but lit up when I read it to him. Someone, whom he had no connection with, loved the book. He could rest.

FQ: Many authors want to know how an author sets the scene...what they use to write. Such as: some authors must play music in the background, others must write in a journal before transferring to a computer, some need their loyal pet next to them in order to write, etc. Did Jerry have specific “things” he needed in order to begin writing? And was he interested in one day writing something else?

HALL: His son told me that when Jerry wrote the original draft in the ‘70’s Jackson Browne’s Running on Empty album was blasting at all times. When he wrote this version, it was quiet at all times. He wrote at the computer, generally into the night. He kept a notepad with him at all times to write thoughts and memories. I kept notepads with me as well just in case. He would jot things down during chemo, when we were in the car, anytime he was away from the computer.

He wrote a number of other short stories and really liked the format.

FQ: If Jerry were here, what advice do you think he would give to other authors about continuing the fight to be published?

HALL: Do whatever you have to do. Don’t get discouraged. Get professionals to help.

FQ: If there was one person Jerry could have sat down and had lunch with, author or otherwise, who would it have been and why?

HALL: That is a funny question. He often said he wanted to talk to the actress Debra Winger, thought she was very interesting. But also Tim O’Brien – The Things They Carried – he thought that was a masterpiece.


Posted by FeatheredQuillBookReviews at 1:30 PM